over millennia
between peppered millions
at surprise times and sad

across rolling lands
and conserved desert
and steppèd plateau

unnoticed invisible
daughter stranger slave;
the black and grime of

history of power over other
storeyed and high-
windowed, cacophonous

and market-squared
rhetorically interrogative
aside truth:

“may” is a petition – to a god, to God or to ‘let it be’, it doesn’t matter as long as it is beyond ‘self’ – a directing of hearts (the only armaments that don’t cost a nation), a massing of resource (as-yet untapped and unexploited), a manoeuvring of cause and effect (the only true use of science), a discernment of love like the sharpest of flaming swords; “other” is anything or anyone which is not “myself” and, like a tragic farce played out on the widest of stages, cast of a thousand-thousand “myself”-s (hurry – for one aeon only; apply for auditions here), proliferates inponentially to the power of blind-folded distinction; “history” – I don’t want to know the history that led up to the invasion of Ukraine by Russia, it is a soap-opera that I have seen “ten times or more”, not sure if “I’ve wrote it ten times or more”, “it’s about to be writ again” and I’ve long since abandoned any hope that an original line is to be found anywhere in the entire web of the universe; “power” is male, but male woefully out of balance, to act, to control, to make, to command on the basis of a wobble-board, the king of the castle chanting empty rhymes, unbalanced with respect to “other” and with respect to what-is without blindfolds, a spoilt child who smirks what he wants, a Johnson who dares what he deceives, a Trump who deceives what he wants, a Putin deceived by empty rhymes, so involuted that even before they think to open their mouths have been lying for generations within centuries; “prayer”, “poem”, “lament” is “female”, which is never mentioned, it is “wisdom” (which is never used), it is the balance to male (which is never considered – ‘too impractical’), it is the reference to “other” and the reference to “what-is” (whether “what-is” is blind-folded or not), it is not the replacement of male (that would make it … male), it is the heart-surge of care empty of all self-reference which, unfortunately, has been left in a cave, somewhere, some say in chains, and entertained with flickering lights on the back-wall, for millennia …

out from the trees
he emerged but was bedraggled

he stared just under
ahead, no longer to triumphant horizons

and his sword listed, tinny and tarnished,
unsure to hand;

just yesterday
was a dream where he played the part

and out of step with Kanthaka’s step;
he had lost the Prince

etching, from the Arya Lalita Vistara Nama Mahayana Sutra; Chandaka was the charioteer and the groom for the Prince, Siddhartha Gautama, his chauffeur, in a way, but also a confidant, to some extent; it was Chandaka who led the Prince out of palace-life where the Prince encountered the Four Signs (four features of life which he hadn’t taken into account in his privileged life – old age, illness, death and living outside of society and social role); Kanthaka was the Prince’s magnificent horse, worthy of bearing a sovereign, the epitome of beauty, strength and transport; despite society and role obliging the Prince to remain in the palace and fulfil his dharma as king, his urge to get to the bottom of purpose and life was strong from previous lifetimes of vows … he had to leave; the gods themselves helped the Prince escape – it was only Chandaka who did not fall into a deep sleep; Kanthaka’s hooves did not strike the ground, the gates flew open by themselves – because they wanted someone to get to the bottom of purpose and life as well; both Chandaka and Kanthaka were devoted to the Prince but could not fully appreciate the gravity of the Prince’s quest, they played their roles – their dharma – but without full agency: all they could appreciate was the challenge to role and society that they had participated in, and no means to understand beyond that …

hola de nuevo Gran Canaria
with your reveal of dark ink identity
your candid feet with no guile, each toe
tells a different story to your tread – painted
toes and slight bones between knuckles

ah, you bodies you slink
cool and day-glo all about me
you bath-robe gods high above
with your salt-water pools and fruit –
the headland a giant sitting Buddha 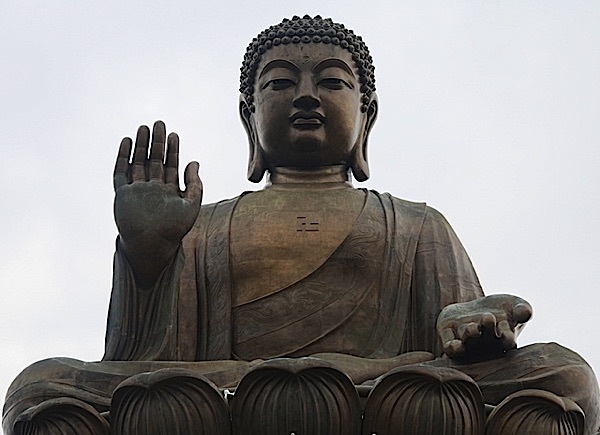 beach wormhole: is there anything to write?
Buddha wormhole: child
feet wormhole: cinnamon / milkshake
identity & water wormhole: and // do your ears burn red?
sound wormhole: Plumstead – Woolwich – Plumstead 220211
stone wormhole: St. Mark’s flies flagpole upwards / with the forelegs hanging down obscene / reaching some height blindly to connect / out from the long-stalk tri-separating up- / to-seeded rounds of pod like acacia what / is it called “‘hogweed’ I-don’t-know- / what-it’s-called-but-goats-love-it-and- / it-makes-them-burp-a-lot”

constant éclat and smack
from spout of god or shell

of cherub avec fraças and
badinage of flowing passersby

who pause in declaratory
language among nodding

under plinth and pillar
of warm carved stone

stepped to the earth
a god stood like a man

brooded on the docks
by the pillars while a

city grew and festered
about the river in the

outside and inside are merely
framed by the window and

the shadow; where shadow
is architectural and ornate,

there is the Sanctum Sanctorum;
on entering one becomes

the patterns of past shadows
alternately contrasted with

one’s own light, most know not
that they have entered already –

dim under their own
machinations; others take the

Bigger Picture and illuminate
their own self hideous to

their godly desire: both the
light and the dark will blind you,

tripping you to all manner
of lunge, there are few,

indeed, who will settle for
the purple mist between

contrasted out from within ‘Beyond the Purple Veil’ in Strange Tales #119, April 1964; written: Stan Lee; drawn: Steve Ditko

down by the docks, by
the piles, while a city grew
and festered all about

the river: hatch and cross,
pen and ruler, private
and bitter, sphere and

plane, all with woven
curtain pulled, defeated,
across every portal, and

no room for Quiver of
Tiffany, only a rage that
I cannot control, after all

here it comes again, between
the warp and weft of chording;
all the engines of thrust, all
the snare of history, all propulsion

`round various turnings, trails
left vaporising; counting … up
to crescendo, looking up to tread,
to lacunae; to ascend is to lose,

to step through that door: fall/
ascent mean nothing off-sphere;
tumult of horizon sitting in my
kitchen, stumbling on my planet,

there’s nothing I can do: there
are – so – many – more – chords,
variants on a minor, travelling to
where we are all along, feeling

very still … lost where we all are;
the sounds of 1969 looked very
different today – loved-up, peopled-
up, gods upped be-coming – up;

down the slippey ascension of wish,
up to the echoing boroughs of cloud-
bank, where the damp damp dawn
falls silent to urban horizon, higher

for to widen the neighbourhood
streets and higher to deepen the road-
side trees; none of it didn’t, but it
[would have] seemed that way

the continental stride of trains

in the time to traverse the wide field
at 125 mph; one   two   almost three

so, there always is purpose
(two men ride on a carriage)
it was all about, everywhere,

locked in stone and resonance
(the gods never disappeared)
reason punctured the skyline,

vision was buried in the ground,
reason made the sky stop
in a line, defined the sky

in our mind, from the earth;
there is a point inevitably
atop every steeple, there is

always only a point, there is
always only one God, above
all columns and pediments …

a little snippet from askance From Hell, askance from chapter ten of From Hell by Alan Moore and Eddie Campbell, gwn’n’avvalook

air wormhole: the edge has come …
architecture & Alan Moore & life wormhole: the four whores of the apocalypse
buildings wormhole: 1959 –– MANHATTAN –– 2012
history wormhole: events happen / through all measure of name
sky wormhole: September – silhouette of leaf // the / inside and the / outside
skyline wormhole: Buddha Amitabha
stone wormhole: I am a solid block of stone
travelling wormhole: step

The home of forgotten music...finding old reviews before they're lost....

Where books, movies, anger, confusion and musing live together in sin.

a few words spewing from my soul...

The daily life of an addict in recovery