blue sky high
down to lime

in between
grey branches

there came the time
about the red-tiled house

when the trees had grown
high-enough to sway away

from roof, to loom over roof to be
the new horizon, lime and distant,

no branches until the canopy
creating a depth that was

dizzying, higher than the
chimneys, year after year,

under ruddy clouds and a
brown sun between autumn leaves 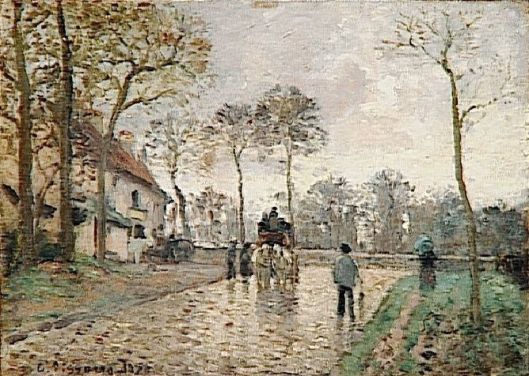 up through the depth of The Diligence at Louveciennes, 1870 by Camille Pissarro

over the roll of hill the town
of Pontoise reared architecture

of afternoon-future, grey and
soupy air where I will try my

life later, but here the sun
has set, kindled treetops with

lime air, blazed the tree
across the road to brown and

orange flame,
until the rooks could take

no more, split, singed and
away in array before the

silence of the cottage wall
wide and orange with the

lazy smoke, and modest
from the blood-red pots

right there, from La Route, Effet d’Hiver, 1872 by Camille Pissarro (… actually, better if you could see the original)

in 1973
waste bins jumped up
syncopated
all down the sidewalk

to the right to the left
the bird on the single

to white curds above
the darkening hills

hideous and perverse satisfaction
to phemur on which it sits, the

messenger is sent lumbering clothed
in outsize roles and ragged over

that it may let fall across all facial
thought – oh, the faltine flames

that flicker lime between furnished
brow, the words, not seen, but rise

in smokey scapulas, the being in
cross-hatch has frantic eyes, the amulet

has light which cannot be framed –
turned backs of saddened victory

buggy
pulled backwards over
the flat paviours
of Mogan

toddler
asleep like a young
granddad in tiny
lime crocs

twilight
and parasols down
within minutes

scurfing the other holding
the book open leg out

straight one knee up perfectly
skin-red like fraise yogurt

beach wormhole: the evening
Carol wormhole: I turn to wake up
hands wormhole: woman / has worked in the gym / got a build
horizon wormhole: Infantino / district of Gotham
lime wormhole: 1968
red wormhole: walk from Castleton to Hope
twilight wormhole: writing: // in turn

and avenues rolled down
in every direction – through flash lemon

bolts of mist and haze
across each intersection – and ankle mauve

and slightly too little
worn – for the morning shift of breezes

from the morning’s walk, in the burnt
orange street of a constant 30º Granada
of a currently perpetual 2 pm, then
just a twist of no-tickets to the Red

Castle all week; a cup of milky coffee
waiting, but not before I drink the
run-off olive oil and soy sauce from
the green and bluely leafed plate

with all their historynfrastructure; born within
two months of the 1960s, towards the end

I was flowering, but with a knuckle in the
stem below the petal receptacle, made me

always look downwards to the ground: I sit
for hours hunched over a table writing, I sit

for evenings correcting a tendency to
close my eyes, I sit slouched in all manner of

chair reading and reading; it will take decades
of shade and whither before I raise

in the immortal words of Chogyam Trungpa Rinpoche: “the path is the goal”

Inspiration on the Vajrayana Path (if words too small, set browser to magnify to 125%)

I Think A Lot

it is all just bullshit anyway.....

I am the "little armored one", moving gently through life. Hoping to safeguard my sensitivities with layers of words and the expression of thought. Shielding my mirror neurons at times, or tasting music and spinning till I'm dizzy. Every moment here is a gift.

Poetry, musings and sightings from where the country changes